[Editor's note: Please see the important update below on the veracity of the story that the Obama campaign had a role in the release of the note.]

Barack Obama wanted the world to know that he can pray like a Christian. Thus, he penned a ‘note to God' on stationery from the King David Hotel in Jerusalem, and he generously gave a copy to the "international media even before he put in the Kotel, a short time after he wrote it at the King David Hotel." Thus says the Ma'ariv spokesman in defense of his newspaper, which may be the subject of a criminal investigation for publishing the ‘note to God' which Obama gave to the paper. For, interestingly, not only Ma'ariv was a recipient of Obama's generosity, so was Yediot Ahoronot (YA), the most popular Israeli daily. YA also obtained the ‘note to God' from Obama but declined to print it, ironically, "to respect Obama's privacy." 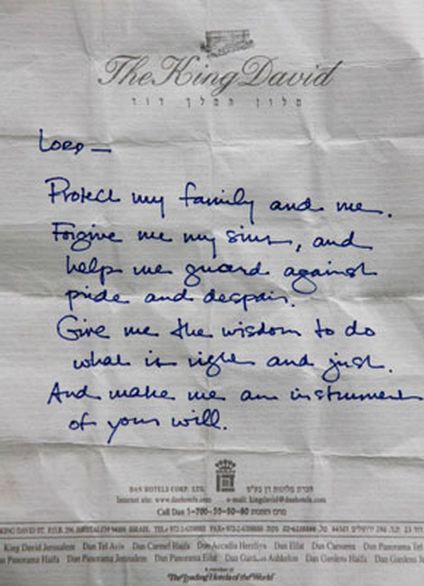 The Obama note at the Western Wall is a story with more questions than answers. Some might ask, why not put the best construction on things (Eight Commandment) and let the matter pass? In the normal course of events, the Eight Commandment approach is the better way, regardless of the religious persuasion of the individual involved. However, the note at the Western Wall affair is not just a story about religion, about one man doing what countless other men have done before him: inserting a message to God into the Wall.
Thus, this is a political story that is essentially about character because the man putting the note is running for the highest office in the United States of America-the office of the president. Given Obama's proclivity for playing the low card; his history of reversals on issues; and his refusal to acknowledge error, there is sufficient cause for the scenario as envisioned.
Who is Barack Obama? Is he the kind of man who would write a note intended for the Kotel, send the media a copy, stick the note in the Kotel, have the note extracted and conveyed to the media all for political gain? That is the question that is germane to his character.
The story is a simple one with twists and turns.
July 24th
Barack Obama goes to the Kotel/Western Wall as the sun begins to rise on Thursday, July 24th. There, Rabbi Shmuel Rabinovitz reads to him; then, Obama places his note in the Wall. The Jerusalem Post reports that a man grabbed a scrap but was disappointed to discover it was not Obama's prayer.
July 25th
CoVisions Productions posts a video of the note-grab at YouTube. Israeli Insider, who identifies the source of the video as "David Cohen, ‘a freelance photographer/videographer currently living in Jerusalem'" says Cohen "reports that ‘[s]econds after Obama left the stones, some of his entourage stepped up to the wall (dressed in suits) and I recorded a young man gathering notes in his hands in what appeared to be the search for Obama's freshly placed personal note. He is joined by others who unwrap notes and read them. One person [is shown] walking away from the wall with a note that he unwraps as he tries to aggressively block the camera lens."
July 26th
he Jerusalem Post's Aron Heller writes:

"Ma'ariv published a photograph of the note on its front page on Friday. It said the note was removed from the wall by a student at a Jewish seminary immediately after Obama left. [....]

"Another Israeli paper, Yediot Aharonot, published an article Friday saying it had also obtained the note but decided not to publish it, to respect Obama's privacy. Nearly all other Israeli media outlets ignored the story."

The LA Times carries a story that is different from Heller's on this point-staff writer Richard Boudreaux said that Ma'ariv's "chief rival, Yediot Aharonot, claimed that it too had been offered the note and had declined to publish it out of respect for Obama's privacy." The key word in Boudreaux's story is offered, as opposed to obtained in Heller's.
Why did Boudreaux alter the verb when all the Israeli papers used obtained? That is a question I have asked him and am awaiting his reply.
July 27th
The Jerusalem Post reports:

"[A] Ma'ariv spokesman said that ‘Barack Obama's note was approved for publication in the international media even before he put in the Kotel, a short time after he wrote it at the King David Hotel in Jerusalem. In any case, since Obama is not a Jew, publishing the note does not constitute an infringement on his right to privacy.'

"Obama's campaign has neither confirmed nor denied whether the prayer published by Ma'ariv was in fact written by Obama. A campaign spokesman, however, made clear that the campaign hadn't approved the publication of any kind of prayer note."

Ma'ariv's denial of its previous story enters the news-stream after this.
July 28th
The Plank at The New Republic runs a story with this comment by Zvika Krieger:

"UPDATE 2 (6:10 a.m.): Since posting this item, I've gotten a lot of comments from people questioning the veracity of Ma'ariv's accusation.... Though Ma'ariv is one of Israel's most prominent newspapers, there is certainly reason to question its motives regarding this story, considering it is trying to justify its own much-derided decision to print Obama's letter.... I've found additional quotes from Ma'ariv spokesmen to three other Israeli publications reaffirming their narrative-and going even further than their quotes to the Jerusalem Post by explicitly saying that the Obama campaign approved the printing of the letter, and even gave copies of the note to members of the international media before he went to the Western Wall. But Ma'ariv has yet to produce tangible evidence for either of these accusations, and I'm withholding any endorsement of their claims until they do so.

UPDATE 3 (4:25 p.m.): I finally heard back from the Ma'ariv spokesman, who denied that the Obama campaign leaked the memo to them or gave them approval to print it, and who disavowed the alleged spokesman who gave quotes to at least four Israeli publications. At the risk of beating a dead horse, I'll be following up with those publications to find out where they got those quotes from. I just spoke with an editor at one of those publications who broached the possibility that Ma'ariv was trying to deflect criticims of it by releasing these spurious rumors about the Obama campaign, but upon realizing that they'll have to back up those accusations, is now disavowing them...."

The Jerusalem Post, on the same day, contains this comment by code-name Aleph, who is reputed to have filched the note: "‘I'm sorry. It was a kind of prank,' Aleph said, his hands shaking as he fingered the tightly wadded-up sheet of King David Hotel letterhead. ‘I hope he wasn't hurt. We all believe he will take the presidency.'"
What to think of all this?
David Cohen's CoVisions Productions video suggests that Obama's campaign is gaming this and that Ma'ariv has either been suckered or is blowing smoke.
Significantly, Ma'ariv's defense for printing the note (Obama's not a Jew so no biggie) plays into the Jew-did-it narrative. Why would Ma'ariv offer Obama not a Jew as a defense when that statement is contrary to religious law? Surely the journalists and editors at Ma'ariv know that. Either Ma'ariv is secular and wants to slap at the religious community (just like the American press) or they wish to slap at Obama's Arab Muslim father. Their February cartoon of Obama painting the WH black suggests that Ma'ariv's editorial page may have issues with Obama, not racially but vis-à-vis his plans for Israel. Whatever, not a Jew is not a defense acceptable to the religious community or Israelis as a whole.
Yediot Ahronot's claim that it had obtained the note (Obama direct) rather than received a copy (the seminarian) of the note suggests that the stolen note is a campaign stunt. If YA has a copy, with all the creases necessary for stuffing in the Kotel, then the student may be the only source. Nevertheless, the video shows that he is part of the Obama retinue whose job is to extract the prayer from the Wall. There are other Obama security people there; how could this young man act unrestrained?
On the other hand, if Obama offered YA the text himself, YA would accept it and, for privacy reasons, still not print it. Given YA's privacy stance, it is unlikely that they would have accepted a copy of Obama's text from a secondary source. It is noteworthy that YA did not say that the seminarian provided the note to them.
YA could end the story by publishing its note, the condition of which would indicate the source. A note folded envelope-style signifies Obama; a note, photocopied and showing the creases made to stuff it in the Kotel, shows the seminarian.
If Ma'ariv published the wall note, the creases in it indicate that it did, then what did Yediot receive, from whom, and when?
All Ma'ariv has to do to put the entire thing to bed is to publish the original they got from Obama.
Neither Ma'ariv nor Yediot Ahronot has offered anything to end the speculation about this note. Why won't they?
Finally, given the video which shows that the student was in Obama's entourage, the conclusion I have drawn is that the whole thing is likely to be an Obama campaign publicity stunt that politicized the Western Wall-of a piece with his campaign posters along the entry way. His possible reasons, I have laid out above.
|