Warning: mysqli_free_result() expects parameter 1 to be mysqli_result, bool given in /var/www/html/americanthinker/admin/common/functions/func.general.php on line 126
 Conservatives Must Not Practice the Politics of Despair - American Thinker
|

Conservatives Must Not Practice the Politics of Despair

"If you see ten troubles coming down the road, you can be sure nine will run into a ditch before they get to you."
- Calvin Coolidge

Conservatism is the doctrine of least expectations. Conservatives tend to view the world from the bleakest of perspectives. Man is a fallen creature, a rickety bridge between the beasts and the angels, driven by appetites and urges perhaps best not examined too closely. Mankind takes two steps (and sometimes two hundred) backward for each step forward, and often enough, those forward steps are in the wrong direction. Humans are steeped in error, and any change holds within it the danger of catastrophe.
This is the tragic vision of life, a philosophy of limitations. As such it is not unimpressive, and may well be close to the truth. (I find it a pretty apt description of the human universe as I've experienced it.) But it's not much of a formula for practical application, particularly when it comes to politics.
We've been seeing plenty of evidence for this in recent months, as involves the current fortunes of the GOP, the vehicle for conservative values in our time. Thanks almost completely to its own ineptness, the Republican party stumbled into the political wasteland in 2006, and two years later still cannot believe that it happened, much less come up with a strategy for correcting the situation.
The GOP has in the past year lost no less than three special elections --  in Illinois, Louisiana, and Mississippi -- that it should have won, largely due to sheer dumbness (during the Mississippi campaign, local Republicans thought it a wise move to bring in Trent Lott, arguably the least-respected individual in the party, to drum up enthusiasm ). Tom Coburn,   than whom there is no smarter conservative now active, believes that the GOP is in for another whipping this year, and that the party deserves it. So be it -- such periods are not without value, acting on political parties in the same way that recessions act on business, offering an opportunity to reflect on errors, make corrections, and cut away odd pieces of dead wood before moving on.
But that's not the way it's being viewed on either side. The left, confusing as always the GOP with the conservative movement, is proclaiming the "death of conservatism" (as in the lengthy piece by somebody-or-other in The New Yorker a few weeks back) and the second coming of the perverse form of "liberalism" that dominated much of 20th century American politics.
2008, we're told,  is a "transformational" election, a revolutionary moment in which everything that went before will be overturned, and the nation's entire political sphere utterly changed. Barack Obama is the human embodiment of this moment -- the New Moses who will lead the American people into their promised land. (The part about wandering the Sinai for forty years appears to have been overlooked -- note to Republican operatives.) We're called on to prepare ourselves for a combination of the New Deal, the 60s, and the October Revolution all rolled into one.
No small number of conservatives are echoing this view. Even the cynical and wise Victor Davis Hanson is ready to throw up his hands and allow Obama the purple toga, and he is no way alone. It's perfectly understandable that Democrats will view events as occurring due to vast and unopposable historical forces -- they are, after all, ideologues, and such ideas play a prominent part in their ideology. But if conservatives ever begin to look at developments in this way, it will mean the end. The American left will have persuaded their opposition to adapt their worldview, and in so doing, will have won half the battle.
Despair magnifies all difficulties. The stone in the pathway becomes an unclimbable peak. The yapping mutt becomes the Hound of the Baskervilles. And an inexperienced, first-term senator, who barely squeaked his way to victory against one the most despised figures in American public life, becomes a combination of Moses, Gandhi, and Superman.
But if we step back from the left-wing lens, what do we see? A political apocalypse? A leftist tsunami? Some unimaginable historical synthesis bearing down on us?
No -- what we in fact see is a very slick and adept Chicago pol, in prophet's rags a little too large for him, with a political party clinging to his goatskin tails. It's this, and this alone, that has so frightened the GOP and sent conservatives into catatonia.
What this collapse is about is not at all clear. Barack Obama is alive and fighting, no more than that. His battle with Madame Hillary has leached virtually all momentum from his campaign. He has spent months calling in airstrikes on his own position and setting up booby traps and minefields in areas that he now has to cross. His primary campaign could be taken as a textbook example on how not to set yourself up for the national contest. And the numbers show it: even with his nomination "bounce", Obama is according to CNN, only 3 points ahead of McCain -- a statistical tie.
Among the hurdles that Obama created for himself are:
His messiahhood: The media has done Obama no favor by accepting his self-promotion to secular redeemer. Somebody should read the literature and discover what happens to messiahs after their followers grow tired of them. They might wish to start out with an esoteric collection called "the Gospels". Perhaps an intern could prepare a condensation.
These we-have-seen-the-light campaigns don't wear well. It's difficult to maintain enthusiasm over the long run, and even when that's accomplished, things soon take on a glassy-eyed aura, something on the order of a Moonie mass wedding. Obama long ago passed this point during the primary campaign. Now he has gained a second wind from attaining the nomination. But that will last only weeks before he is required abandon the walk-on-the-water act and attempt something unfamiliar to him: running on his merits.

A related problem that has gone unmentioned involves the Obama iconography. The "halo" photos are a case in point. 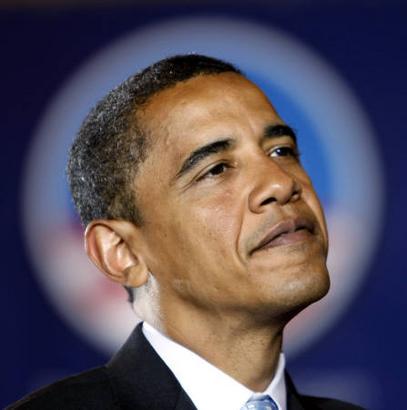 This motif means one thing alone: that the candidate is being compared to Christ. That will be taken one way by the mass of the country: as blasphemy. It's a comment on the yawning gap between bedrock Americans and the elites that no one has seen this as Obama's strike two. He insulted religious Americans once with his "God n'