By Allan J. Favish
Despite the protests of her husband, Michelle Obama deserves intense scrutiny. She may be family, but she is also at the top of her husband's list of advisors; perhaps no less important than Robert Kennedy was to his brother Jack.
She would be a key figure in a hypothetical Barack Obama presidency, her judgment relied upon when it's time to make decisions. We have the candidate's word on it. Didn't you read about it?
Perhaps not.
Unless you read Trumpet magazine, founded by Rev. Jeremiah Wright, you almost certainly didn't know about the candidate's view of his wife's role when he has to make decisions. Since his claim to superior judgment is a fundamental premise of his campaign, you might be interested in what he has to say about her judgment.
But that particular issue of Trumpet seems to be hard to get. It sounds like the issue denied to Stanley Kurtz. His article in the May 19, 2008 edition of The Weekly Standard entitled "Jeremiah Wright's 'Trumpet'" examines "the 2006 run of Trumpet, from the first nationally distributed issue in March to the November/December double issue." Kurtz refers to an issue or issues that he could not obtain. Kurtz states,

"Obama himself graced the cover at least once (although efforts to obtain that issue from the publisher or Obama's interview with the magazine from his campaign were unsuccessful)." 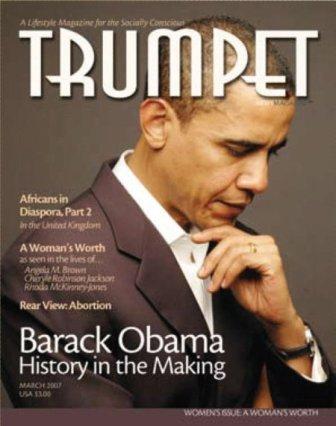 Obama is on the cover of the March 2007 issue, which also includes an article titled "Barack Obama: History in the Making" by Temple Hemphill. The article extensively quotes Obama and contains some nice photography. But one short segment quoting the senator has assumed particular importance in light of his statement May 19, 2008 to ABC's "Good Morning America" that people "should lay off my wife." He added to GMA:

"But I do want to say this to the GOP. If they think that they're going to try to make Michelle an issue in this campaign, they should be careful. Because that I find unacceptable."

Here is how he characterized his wife's role in his judgment, scanned from the magazine:

Not only is Obama endorsing Michelle's "sound judgment", he is stating that he relies upon her above all others for "sound judgment".
If that's the case, then his claim to superior judgment, a cornerstone of his campaign, is necessarily dependent upon the quality of Michelle's judgment. If he endorses the judgment of somebody who has poor judgment, that means that Obama has poor judgment. So we have to examine Michelle's judgment through her public speeches, as well as other information which helps us evaluate her judgment.
Moreover, it would be unfair to the electorate to keep the views of a presidential candidate's top advisors hidden or immune from public debate. A presidential candidate's top advisors have significant influence over the candidate's policy choices. If she is the person who has the most influence on Obama's judgment, the public needs to know all about her views. The judgment of a president shapes the future of the nation. In time of war, the survival of the nation may depend on the president's judgment. We know now that Obama relies heavily on her judgment when he makes decisions.
In addition, of course, Michelle Obama has been campaigning for her husband, and expressing her views at public events. It is not reasonable for anyone giving a speech to be immune from criticism simply because of a family relationship.
Barack Obama's pose as a defender of his wife clashes with the public's right to know about his top advisor, a person who shapes his judgments and whose judgment he endorses.
Allan J. Favish is an attorney in Los Angeles. His website is allanfavish.com.
|