Warning: mysqli_free_result() expects parameter 1 to be mysqli_result, bool given in /var/www/html/americanthinker/admin/common/functions/func.general.php on line 126
 Obama, the Pardoner, and his Tale - American Thinker
|

Obama, the Pardoner, and his Tale

What are we to make of the extraordinary fervor of some of the supporters of Barack Obama? Stumbling upon a website called Is Barack Obama the Messiah? that chronicles the worship of Barack Obama as the second coming,  I actually did a cartoon double take. The art work assembled there is stunning. Some is the stuff of Monty Python or Saturday Night Live, except that it is serious, it would seem.

Some of it is perhaps a result of what might be called educated stupidity. Orwell remarked on a  separate issue,

"One would have to be a member of the intelligentsia to believe such things...no ordinary man could be such a fool."

There is also an element of the teenage infatuation obvious to anybody who remembers how Ed Sullivan was swept off his own stage by The Beatles.
But Obama as Messiah does have an authentic following among the gullible chattering class. 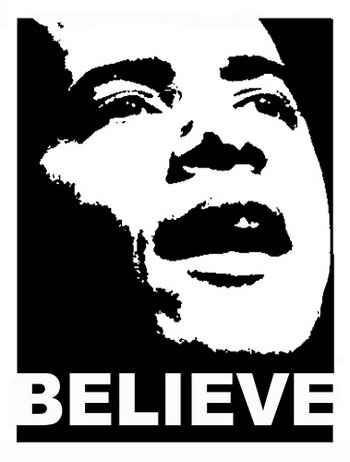 Leading the genuflecting MSM elites is Hardball's Chris Matthews,  now reduced to a pathetic and grotesque perpetual adoration.
Conversions often are accompanied by compelling witness, but not in Matthews' case. It was only a few months ago, as a Clinton shrill just before a string of inconvenient Obama victories, Matthews kept badgering a Texas State Senator, "What has Obama ever accomplished?" It's still a good question, not yet been answered, but suddenly is no longer important.  While Matthews is but a parody of an earnest star-struck co-op student would-be investigative  journalist,  he often  resembles the medieval herald-jester, calculating the political winds before delivering  an entreaty, a roast or a riddle.
This sort of thing is nothing new. In fact, in some of foundational literature  of the English Language, the character type of Matthews is depicted among the commoners in Chaucer's time, totally captivated by the eloquent speechifying of professional frauds, the pardoners, the most entrepreneurial of itinerant relic-hawkers.
While The Wife of Bath's Tale and The Miller's Tale are full of ribald humor, The Pardoner's Tale has that searing sarcasm so close to the truth that the Pardoner shakes off any embarrassment to boldly promote his own sleight-of-hand oratorical gymnastics. But at the same time Chaucer excoriates the sinners-willing victims of another scam-as they knowingly look past the forgeries and the hyperbole, easily parting with their silver and their self-respect, desperate for salvation but satisfied by entertainment value alone.

And by his flatteries and prevarication
Made monkeys of the priest and congregation
But still to do him justice first and last
In church he was a noble ecclesiast.
How well he read a lesson or told a story!
But best of all he sang an Offertory,
For well knew that when that song was sung
He'd have to preach and tune his honey-tongue
And (well he could) win silver from the crowd.
That's why he sang so merrily and loud.
From the General Prologue, The Canterbury Tales, Translation Neville  Coghill, 1951

It is the modern day commoners -- Obama apologists, sponsors and supporters -- who are willing to overlook  Obama's disingenuous character, willing to embrace his phony 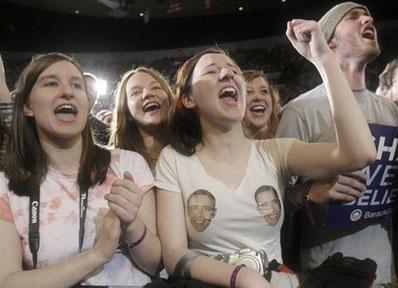 exhortations for unity and willing to underwrite his distortions, half-truths and outright fabrications. These are the enablers for Obama, the Pardoner.  Obama the Pardoner sells his own 21st century brand of  indulgences, promising equal outcomes, harmony with all people economic redistribution and perhaps the most profound blessing -- absolving white man’s guilt by placing a black man in the White House -- in exchange for a credit card authorization and a primary vote.
Much literary analysis of The Pardoner's Tale has been devoted to the cognitive dissonance of a prototypical  pardoner's audience, willing dupes sincerely believing in a transcendent deliverer knowing the warrant is false and the relics just another bag of pig knuckles. Equally compelling is the study of the Pardoner as moral arbiter among the compromised. The Pardoner, imprisoned by his own hypocrisy, knowing that his penitents are fully aware of his deceptions, nonetheless takes the high ground because for the moment at least he is smarter than anyone around him,. After all, it's only his wallet that gets fatter:

If there be one among you that is willing
To have my absolution for a shilling
Devoutly given come! And do not harden
Your hearts but kneel in humbleness for pardon;
Or else, receive my pardon as we go.You can renew it every town or so
Always provided that you still renew
Each time, and in good money, what is due.
It is an honour to you to have found
A pardoner with his credentials sound
Who can absolve you as you ply the spur
In any accident that may occur
From The Pardoner's Tale, The Canterbury Tales,Translation Neville  Coghill, 1951

Chaucer's pilgrims reach their moment of truth at the end of The Pardoner's Tale when the Pardoner beckons the innkeeper to be the "first to pay and kiss my holy relics right away...  Come on, unbuckle your purse." The innkeeper will have none of it: "not I" replies the Host, "and may the curse of Christ descend upon me if I do."
The Rev Jeremiah Wright's unrepentant blasphemy and hate-filled racism is real enough. Obama would like us to believe it is nothing more than a see-through bag of fake relics and forged papal bulls. Obama's calculated cynicsm and patronizing disrespect of even his most fervent believers when he says Rev Wright has been falsely caricatured would make even the Pardoner gasp. How many Democrats will take a cue from Chaucer's Host to declare, "Enough!"
|