Warning: mysqli_free_result() expects parameter 1 to be mysqli_result, bool given in /var/www/html/americanthinker/admin/common/functions/func.general.php on line 126
 Bill Ayers and the Subversion of Education - American Thinker
|

Bill Ayers and the Subversion of Education

Barack Obama's longstanding ties to Bill Ayers and Bernadine Dohrn have elicited a great deal of controversy and have weakened his campaign. Senator Obama attempted to distance himself from this dynamite duo -- as he has distanced himself from his "sounding board" and "moral compass" Jeremiah Wright (whom he now dismisses as just his former pastor) -- by stating that their actions as leaders in the Weather Underground bombings happened when he was 8 years old.

Of course, he elided the fact that they have no remorse for their actions and Ayers publicly wished there had been more of them. Ayers escaped prosecution on procedural grounds. In the words of Ayers, "Guilty as hell, free as a bird -- America is a great country".
Possibly relying on connections that Ayers' wealthy father had in Chicago, Ayers and Dohrn were able to land sinecures in academia. Thus, Obama was able to dismiss Ayers as a "Professor of English". On his website, Barack Obama has this to say about Ayers:

Barack Obama has been attempting to burnish Ayers' reputation by characterizing him as a university professor -- still one of the more honored and respected professions in America.  He peddled the notion that Ayers is an educator now and this should absolve him of the burden of his bomber background.
However, what has Ayers done for academia? He has continued to wreak harm -- just in a different but longer lasting way.
Sol Stern of the Manhattan Institute has done masterful work over the years commenting on the state of education in America. Two years ago, he wrote about Ayers in "The Ed Schools' Latest-and Worst-Humbug". The article is a revelation. Ayers may have given up on the bombs, but he has found our nation's classrooms an ideal way to promote his revolutionary and anti-American views. Stern returned to the subject of Ayers' influence this week.
While attending Columbia University Teachers College in 1984 he had an epiphany. He adopted the views of one of his professors, Maxine Greene-a leader in the "critical pedagogy" movement. What did he take away from the course? An ideology that he has promoted throughout his career -- and one that has very little to do with education but has a great deal to do with radicalism. Stern writes:

As Ayers wrote later, he took fire from Greene's lectures on how the "oppressive hegemony" of the capitalist social order "reproduces" itself through the traditional practice of public schooling-critical pedagogy's fancy way of saying that the evil corporations exercise thought control through the schools.
Greene told future teachers that they could help change this bleak landscape by developing a "transformative" vision of social justice and democracy in their classrooms. Her vision, though, was a far cry from the democratic optimism of the Founding Fathers, Abraham Lincoln, and Martin Luther King Jr., which most parents would endorse. Instead, critical pedagogy theorists nurse a rancorous view of an America in which it is always two minutes to midnight and a knock on the door by the thought police is imminent. The education professors feel themselves anointed to use the nation's K-12 classrooms to resist this oppressive system. Thus Maxine Greene urged teachers not to mince words with children about the evils of the existing social order. They should portray "homelessness as a consequence of the private dealings of landlords, an arms buildup as a consequence of corporate decisions, racial exclusion as a consequence of a private property-holder's choice." In other words, they should turn the little ones into young socialists and critical theorists.

All music to Bill Ayers's ears. The ex-Weatherman glimpsed a new radical vocation. He dreamed of bringing the revolution from the streets to the schools. And that's exactly what he has managed to do.

Ayers has subsequently written a best seller used in ed-school courses which focuses on the moral imperative of teaching social justice to students in K-12 classrooms. He has been active in "teaching teachers" that capitalism is a curse and imperialism is an American obsession.
Social justice is a noble sounding pursuit; one we should all applaud. However, the devil is in the details. What precisely are the views that Ayers is promoting?
His course description for teachers signing up for his course on "Urban Education":

"Homelessness, crime, racism, oppression-we have the resources and knowledge to fight and overcome these things."
"We need to look beyond our isolated situations, to define our problems globally. We cannot be child advocates . . . in Chicago or New York and ignore the web that links us with the children of India or Palestine."
"In a truly just society there would be a greater sharing of the burden, a fairer distribution of material and human resources."
For another course, titled "Improving Learning Environments," Ayers proposes that teachers "be aware of the social and moral universe we inhabit and . . . be a teacher capable of hope and struggle, outrage and action, a teacher teaching for social justice and liberation."
The readings that Ayers assigns are as intellectually stimulating and diverse as a political commissar's indoctrination session in one of his favorite communist tyrannies. The reading list for his urban education course includes the bible of the critical pedagogy movement, Brazilian Marxist Paolo Freire's Pedagogy of the Oppressed; two books by Ayers himself; another by bell hooks, a radical black feminist writer and critical race theorist; and a "Freedom School" curriculum. That's the entire spectrum of debate. 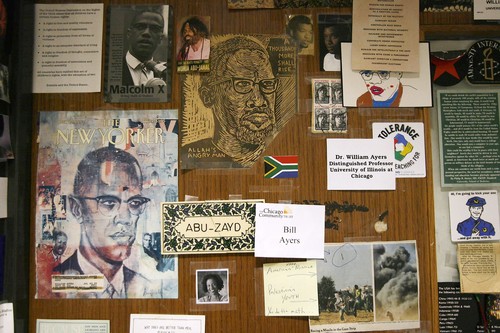 Photo: Chicago Tribune  For an explanation of the signs, see National Review Online

Ayers teaches another course, "Social Conflicts of the 1960s" that promotes the agitprop from his and Dohrn's Weather Underground Days. Paulo Freire was also a leading theoretician of Liberation Theology, which advocated that schools be used to promote revolutionary fervor and actions among the "oppressed" -- which in Freire's view included most of the world. Liberation theology is also advocated by Pastor Jeremiah Wright, which he has promoted through his pulpit for decades. While the liberation theology pushed by the Pastor has its roots in the work of James Cone, which fuses liberation theology with the cause of African-American liberation and activism, the work of Freire and Cone draw upon the same conceptual foundations.
Instead of educating teachers to prepare their students for the real world, and to acculturate immigrant children into the civic culture of America, Ayers is helping to create a cadre of teachers who will promote a view that is radically at odds with the mores of most Americans and that is divorced from the traditions of education in America.
A little over 10 years ago, Ayers and Greene were able to get a series of books on education published. Ayers was editor and Green served on the editorial board (with Rashid Khalidi -- a supporter of the Palestinian cause, the Edward  Said Professor of Arab Studies at Columbia University.  Khalidi also has ties with Barack Obama that have been widely reported when journalists cover Obama's extensive support for the Palestinians, most recently in the Los Angeles Times "Allies of Palestinians see a friend in Barack Obama").
How should teachers teach science, for example? According to one of the books, Ayers and Greene approved for publishing,

Similar gobblygook applies to the teaching of math. Eric Gutstein teaches with Ayers and, according to Stern, is a Marxist ideologue. He has politicized his math classes and proudly notes that his course has made -- and will make generations of students -- more aware of the injustices built into capitalist society. One way of doing this is by using unequal wealth distribution to teach fractions.
Stern admirably reports on the growth of this "social justice" based educational system throughout America. Sixteen of the top educational schools in America -- that shape the leaders of our educational system -- are heavily influenced by this type of "teaching." Education is replaced by agitprop.
Courses that taught young children to feel good about being Americans are being replaced by a system that teaches them to be ashamed of being Americans. Spreading out from the schools that teach our teachers, the ideology that is promoted by William Ayers is revolutionary and anti-American. Ayers has entered his sixties, his lust for violence seems to have diminished, but his revolutionary ardor has not. Instead of planting bombs, he has been a key force in harming our schools and our children.
Ayers was a subversive when he was with the Weatehr Undergound. He is still a subversive, but does his work behind the scenes and with a broader canvass to draw upon. He no longer leads small gangs of bombers but is reaching and shaping a much larger number of people that capitalism is not only bad, but should be fought.
All this courtesy of the taxpayers who might otherwise be assuaged by Barack Obama's assurance that Ayers is a "respected educator".
Does Barack Obama respect Ayers views and goals?
Barack Obama has campaigned as a man who will help reform and improve education in America. As President he would be in an ideal position to do so. But with friends like Bill Ayers, what type of reform does he intend?
Ed Lasky is news editor of American Thinker.
|