Messiah:  "One who is anticipated as, regarded as, or professes to be a savior or liberator."  American Heritage Dictionary
Schtick: "Yiddish slang meaning "gimmick" that has come to mean "someone's signature behavior."

He presents as a fairly nice-looking guy with a slightly dorky quality (I think it's the Bing Crosby ears); who is a smooth, albeit soporific, speaker; who boasts an Ivy League background sullied by the suspicion that he benefited as much from affirmative action as from his own virtues; and who demonstrates a sound grasp of shady Chicago style politics, including, during a remarkably short and generally undistinguished career, some pretty vicious and opportunistic conduct.  I am talking, of course, about Barack Obama, a man who has shot from relative obscurity to the forefront of American politics.

To those who worship at his shrine, though, there is nothing ordinary about him.  To them, he is the embodiment of all virtues.  If you are doodling around with Google and type in the phrase "Obama articulate," you'll get about 277,000 results.  It's even more fun to type in "Obama handsome."  Then you get about 330,000 results.
That's just word play, though.  The real fawning comes in the way people describe their emotional reactions to this former unknown from Illinois.  Take the example of Chris Matthews, an MSNBC talking head whom one might naively credit with a little bit of professional objectivity.  After hearing one of Obama's speeches, Matthews giddily said "My, I felt this thrill going up my leg. I mean, I don't have that too often."  One is afraid to ask what other experiences have occasioned Matthews' exciting little leg vibration.
And then there's the fainting:  At speech after speech, it seems, ladies swoon merely from being in his presence.  There hasn't been this orgy of public fainting since Frank Sinatra or, perhaps, the Beatles.  The fact that this whole thing may be the work of one or two determined fans, doesn't seem to affect some people's belief that it is right and appropriate that women are literally knocked flat on their butts by his aura.
One might dismiss all of this as the ravings of a celebrity culture, trained to become hysterical in the presence of fame, were it not for the vaguely religious note that keeps appearing when political commentators start writing about him.  Andrew Sullivan, a devout Obama supporter, after admitting that Obama has little going for him in terms of such practical matters as experience or knowledge, nevertheless describes the meaning of his candidacy in shamanistic tones.
Sullivan notes that timing is everything, with Obama coming along at a time when people are sick and tired of the old Baby Boomer politics and weary of the culture wars.  It is in this context, says Sullivan, that "Obama's candidacy in this sense is a potentially transformational one."  In other words, despite his admittedly tired old Leftist politics, Obama, just by being himself, will miraculously bind us all together.
Sullivan is not alone.  Last week, when Bill Richardson ditched his former pal Hillary to endorse Obama, he used almost precisely the same idea to describe Obama's candidacy.  Richardson stepped to the podium and boldly announced that Obama is

"the kind of once-in-a-lifetime leader that can bring our nation together and restore America's moral leadership in the world."

Richardson's stated reason for believing Obama holds this power lies, not in what Obama has done (which is pretty much nothing), but in the fact, says Richardson, that he is a "new generation" who "touched" Richardson with his speech on race.  (More on that speech later.)   I assume that, for the average Obama groupie, those two concepts sound like good reasons to elect a political neophyte as President during a time of war and economic uncertainty.  It's the "Wow!" factor.
This kind of soft, worshipful rhetoric is typical for those endorsing Obama.  Deprived of a candidate who has actual done anything or even stood for anything, they fall back on emotion-laden platitudes that place Obama on a level above that of ordinary mortals.  Already a year ago David Ehrenstein was assuring all of us that Obama can be seen as the "magic negro," capable of functioning as a benign black figure who will make whites feel good about themselves.
Given how rich white liberals have flocked to Obama's banner, it's clear that Ehrenstein was on to something there.  It's too bad that Obama's benignity was shot to pieces with the revelation that his "spiritual mentor," long-term pastor and political advisor, Jeremiah Wright, was a racist crackpot, whom Obama revered, ignored or tolerated, depending on which version of the truth Obama feels like spreading around on any given day.
Even the iconography surrounding Barack Obama has a different feel from that typical for a political campaign.  In recent years, the usual political poster simply has the candidate's name in patriotic colors, as well as some nice adjectives testifying to his leadership abilities and experience.  Here's a good example: 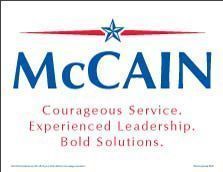 Sometimes the campaign posters have the candidate's picture, which is invariably a color photograph of the candidate looking either firm or friendly.  This is an example from the Clinton campaign, with Clinton valiantly smiling past her ice maiden reputation:

Things are a bit different when it comes to the Obama material.  The Obama Online store, which is an official arm of the Obama campaign, tagged Shepard Fairey to create a limited edition poster for the Obama presidential campaign.  This poster transcends the usual sign aimed at allowing supporters to make their feelings known, while ensuring that the general public gets a surfeit of the candidates' names and faces.  Here, look: 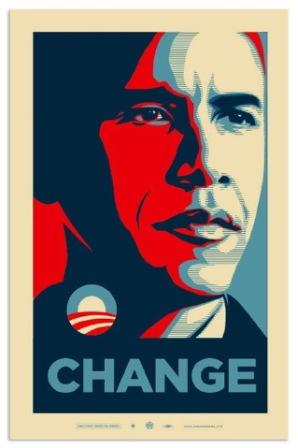 As you see, Obama is no longer an ordinary mortal.  Instead, he has been elevated to a symbolic level, where his name is unnecessary (we all know it, don't we?), his goal is unmentioned (I think he's above petty politics), and his qualifications are irrelevant (good thing, too, since he doesn't have any).  Instead, all that's left is his almost superhuman visage, which is allied with one magical word:  "change."  The political poster has been transformed from advertisement to iconography.
For many months now, I've been inclined to slough all of this messiah-shtick stuff off, attributing it to those liberal fans who operate from a strong emotional base that manages to side step reason.  Reason, of course, would point out that his politics are indistinguishable from other ultra liberal Democrats and his experience minimal.  As Geraldine Ferraro was tacky enough to point out -- how un-Democratic of her -- the only pragmatic advantage he has over other like-minded candidates is his skin color.
Obama's recent race speech, however, indicates that Obama is beginning to believe his own publicity.  As everyone now knows, Obama opened by speaking accurately, and movingly, about the way in America's promised freedom was compromised from its inception by the taint of slavery, a taint that he sees as unrelieved by the hundreds of thousands of lives lost in the Civil War, the remarkable courage of the Civil Rights movement, and the mass re-education of American attitudes in the 40 plus years since the Civil Rights movement.  The Wright experience, of course, has shown us that Obama is not alone in this jaundiced view of America's progress regarding race.
What makes Obama different from other African Americans, who do not find any cause for celebration in America's racial progress, is the way in which he sees himself as a necessary fulfillment of the Civil Rights movement.  Thus, immediately after referring with great brevity to both the Civil War and the Civil Rights movement, Obama put his own candidacy front and center:

"This was one of the tasks we set forth at the beginning of this campaign -- to continue the long march of those who came before us, a march for a more just, more equal, more free, more caring and more prosperous America. I chose to run for the presidency at this moment in history because I believe deeply that we cannot solve the challenges of our time unless we solve them together -- unless we perfect our union by understanding that we may have different stories, but we hold common hopes; that we may not look the same and we may not have come from the same place, but we all want to move in the same direction -- towards a better future for of children and our grandchildren."

In other words, it is Obama himself who will bring to fruition Martin Luther King's dream of a post-racial America.  To this end, Obama is not advancing himself as one who should be President because he's the best man for the job, but as one who should become President because he, personally, by being some racial fulfillment incarnate, will save us from the last remaining "stains" that the Founders created.
Nor is this concept merely inept phrasing on Obama's part (perish the thought), or hypercritical reading on my part.  Obama made precisely the same point a second time in his speech.  After establishing his racial bona fides by describing his mixed ancestry,* he again presented himself as the living embodiment of racial healing:

"Throughout the first year of this campaign, against all predictions to the contrary, we saw how hungry the American people were for this message of unity. Despite the temptation to view my candidacy through a purely racial lens, we won commanding victories in states with some of the whitest populations in the country. In South Carolina, where the Confederate Flag still flies, we built a powerful coalition of African Americans and white Americans."

Thus, even as Obama said that it is a mistake to view his candidacy "through a purely racial lens," he boasted that it was he who bound together the races.  This is also a "racial lens," although a unifying one, not the divisive one the Wright shouted from his pulpit.
What is apparent is that, through these pronouncements about the transcendent meaning of his candidacy, Obama accepts Andrew Sullivan's hagiographic conclusion that his candidacy is a "transformational one," not because of what he brings to the table, but simply because of who he is.  He is the racial messiah, one who, simply by being, will save America from the stain on her soul.
It is, in its own way, a charming conceit.  Unfortunately, though, Obama's presidency won't end the moment he is sworn in, with an orgy of racial healing, followed by a fade-out to a glorious sunset.  Instead, as he's made plain time and time again, including in his speech on race, once the orgasmic feeling of having elected "the One" passes away, Americans will awake to discover that, in fact, they have bedded down with the same old, same old.  This is messianic politics only if ones idea of salvation is the usual Democratic fare of big government, big taxes, and big denial when it comes to the realities of World War IV.
___________________________________
* Incidentally, one of the most pernicious legacies of slavery is the fact that most African-Americans are, in fact, of mixed race - a genetic reality that forced racist Americans to create the horrific "one drop rule" to distinguish themselves from their brothers and sisters of color.)

Bookworm is a crypto-conservative living in hostile teritory, and proprietor of the website Bookworm Room.
|