Warning: mysqli_free_result() expects parameter 1 to be mysqli_result, bool given in /var/www/html/americanthinker/admin/common/functions/func.general.php on line 126
 Operation Gratitude in Iraq - American Thinker
|

Just in case you aren't aware of it, the most trendy catchphrase among the peace-at-any-price left has become:

"We hate the war, but we support our troops."
Lest we forget, however, a good number of these are the same people who call terrorists "freedom fighters."
So, who do they think they're fooling?
Meanwhile, the flip side of the say-all-and-do-nothing leftists are the myriad silent-majority forces at work day and night proving with their actions that they truly love and support our valiant military men and women.
One of the most effective groups at work on behalf of our troops is Operation Gratitude, an assemblage of Americans who put aside every difference among them in the common cause of loving our soldiers. Since its founding in 2003, this one group of all-volunteer supporters has sent 300,000 care packages to our troops serving in harm's way.
And all of it started because one American mom decided that she could not sit idly by in her safe, comfortable home doing nothing while our young men and women willingly left safety and comfort behind to fight for the rest of us.
Carolyn Blashek, founder of Operation Gratitude, has become for all intents and purposes, America's Troop Mom.  She and her mission to minister to the morale of our troops through her simple, but ingenious, "care" packages are living proof of Basil King's famous injunction: http://www.online-literature.com/basil-king/
"Be bold and mighty forces will come to your aid."
Mighty forces, both seen and unseen, have indeed come to the aid of Operation Gratitude in its essential mission of showing our soldiers we all do care.
And those mighty forces just keep on coming, time and time again, in the most unlikely "coincidences," from the most unlikely sources.
Mighty Forces Take Carolyn to Iraq
In late December last year, when Operation Gratitude's holiday drive was in full gear, with hundreds of volunteers packing thousands of packages, and carefully addressing each to an individual soldier overseas, Carolyn realized that a mission milestone would be reached within the month.  The 300,000th  package was nearing assembly and its recipient was already named by the computer's data bank.
One of OpGrat's mighty forces had already donated the keys to a brand new Jeep Liberty for the recipient of this milestone care package.  And the excitement among the volunteers was palpable.
Coincidentally, the soldier picked by the computer to receive the 300,000th package was a member of the brigade under the charge of Major General Hertling, commanding general of Multi-National Division North in Iraq.  Carolyn Blashek and Major General Hertling go all the way back to OpGrat's founding in 2003.
In the beginning, when Carolyn was merely bold, she had no mighty forces.  But she had enough boldness to be mighty in her own right, and she got ahold of the General's name through channels, and sent him an email asking for the individual names and addresses of all the soldiers under his command, so that she could send them each a care package from home.
The general now says he thought she was a bit out of it at the time, and wrote back simply:  "Ma'am, I don't think you know who I am or how many soldiers I have under my command.  I currently have a force of 39,000 soldiers," thinking that would be the end of it.
But our Troop Mom wrote back to the general, quite boldly indeed:
"General, I don't think you know who I am.
Just send me the names and addresses and I will make sure every one of them receives a care package from us at home."
When the 39,000 packages arrived as promised, and the general saw the amazing effect they had on the morale of his troops, he immediately became a treasured mighty force on the side of Operation Gratitude.  And as soon as he was notified that one of his own soldiers was slated to receive the 300,000th package, he immediately set things in motion that would coalesce in bringing Carolyn Blashek and her trusted right-hand man, Charlie Othold (USAF, ret), to Iraq to present the package with the keys to the Jeep in person. 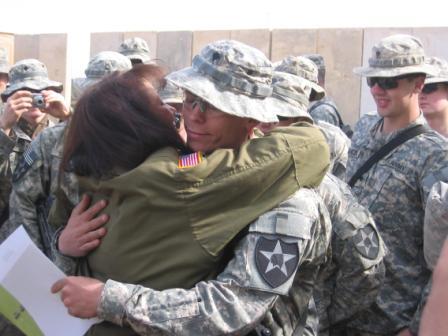 Now getting to the middle of the war zone would be nearly impossible for the ordinary American citizen. But with a decorated general in the lead and his own mighty forces covering your flank, neither paperwork nor bureaucracy are supreme obstacles, and you land in Iraq hoping you remembered to pack your hair dryer. 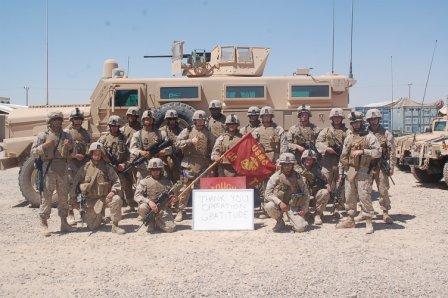 Marines say thanks to Operation Gratitude

The War through a New Lens
In Iraq, Carolyn found that it's one thing to view the war, our soldiers and their mission through an often non-supportive media lens.  But it's quite another to don full body armor and set off for the desert on a Black Hawk helicopter for a genuine birds-eye look around.
For Carolyn Blashek, Troop Mom, who spent 2 days on the ground in Iraq in January, the experience imparted a profound new meaning, not only to her own mission of sending care packages to our soldiers, but also to her perspective on the war itself and our national mission in the Middle East.
rue Mom that she is, Carolyn spent most of her time and energy in Iraq delivering packages and hugs, love and reassurances to every man and woman in uniform who crossed her path.
Two Unforgettable Experiences
Carolyn says she had two experiences that truly changed her forever and reinvigorated her resolve to serve from home until true peace with justice can be achieved.
The first experience was a memorial service for six American soldiers and one Iraqi, all of whom had lost their lives in a house-born IED explosion.  While the war itself is 24/7, dusty, dirty, smelly and bloody, the memorial service is military pageantry.  Civilization in the face of enemy barbarism.
In a desert field, with no shade for solace, men and women of exceptional civility and honor gather to pay their last respects to their own fallen heroes.  No detail is spared.  Each life lost is given the profound reverence that is due.  And each soldier present is given the chance to speak, to pay tribute to the life that has been given so selflessly in the cause of liberty.  The generals salute the heroes.  The crisp, clean gunshots are heard piercing the silent reverie of those who remain on watch.   The brave are sent home to their families for the real grieving to begin.
And the war goes on.
But all who have seen the cost with their own eyes are forever changed, will be forever more diligent in their own meager sacrifice, so that the fallen will not have died in vain.
Life-changing indeed.
Anyone Can Carry an IED
How does a Judeo/Christian civilization fight a war against those for whom our ideas about civilization and honor are meaningless?
Those who would take the life of an innocent young child or a mentally impaired adult, and use that life itself as a weapon, define this war.  Among this enemy, all human life is expendable, deemed worthy only in sacrifice.
Al Qaeda forces in Iraq have demonstrated over and over again that there is no limit to their brutality in pursuit of their jihad.
Carolyn Blashek now understands this foe, and her understanding dawned in an instant, even as she stood in a village under heavy armed guard, wearing the weighty body-armor designed to protect.
Major General Hertling needed to inspect a road in the north that had been recently cleared.  For five years this road had been blocked by Al Qaeda and their hidden IED's, preventing all commerce and help for the tiny village of Khan Bani Saad.  Readers may remember that this is the village where our soldiers found videos showing Al Qaeda training children to bear arms and fight their battles.
While the men of the village bombard the General with their demands for this new building project or another, Carolyn tells me she tried to take in the surroundings and observe the people.  Several groups of young children cluster at a short distance, eagerly watching the unusual sight of the American General with his soldiers.
Carolyn smiles at some of the children.  That Mom's smile that serves in place of the hug she would rather offer them.  Then, she spies a young adult Iraqi male, and he is staring at her.  She is frightened and looks away, back at the children.  And one of them, a young boy makes eye contact with her and begins walking towards her, away from the group of children.  She looks back at the young man, still staring, and back again at the approaching child, still intently watching her.
And suddenly her breathing stops as the question forms:
Is this child harnessed with an IED?  Am I about to die?
The answer that time to the question formed by our soldiers every day as they work in and among the villagers, was "No."
Carolyn did not die in Iraq.  She came home safely.  But she is still haunted by this second experience, that moment in the little village. She says that it profoundly altered the way she views this war.
General Petraeus understands that if we desire to prevail, then our forces cannot remain behind fixed lines, embedded in fortified bases, but must walk among the people, gain their confidence, rebuild their country and help them learn how to build a free society.  But in doing this, our men and women who serve are presented every day with those moments of do-or-die-right-now peril.
And yet they remain a civilized people in a land beleaguered by an uncivilized enemy.
And it is obvious that mighty forces are indeed coming to their aid.
This is not the media lens through which we at home view the war, but it is the one our Troop Mom, Carolyn, now carries in her heart every day and every night, never to be forgotten.
Update: here is a video segment CNN shot in Iraq about MG Hertling

Kyle-Anne Shiver is a frequent contributor to American Thinker.  She welcomes your comments at kyleanneshiver@yahoo.com.
|