Barack Obama Running on his Religion

During his triumphant campaign in South Carolina, Barack Obama distributed a flyer in which he announced the spiritual dimension of his mission, running as a "committed Christian." This caused a certain amount of consternation on the secular left.

It was a remarkable move, perhaps born of a desire to refute rumors that Obama is a Muslim. But by publishing and distributing the pamphlet, Barack Obama officially placed his religion in the political sphere, and highlighted the importance of understanding the particular brand of Christianity he practices. 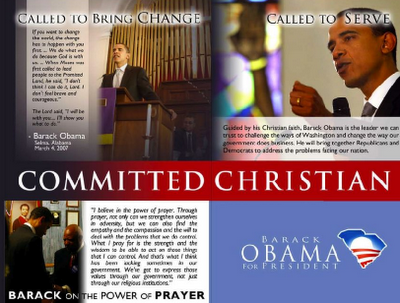 Barack Obama was not raised as practicing Christian, and in the pamphlet, he draws on a speech he gave last June, in which he identifies Pastor Jeremiah Wright, Jr. as the man who "introduced" him to Jesus Christ. Barack Obama in the past has openly spoken of his respect and attachment to Pastor Wright, getting married by him in his church and calling him his "spiritual mentor" offering many other signs of respect.
In his writings and sermons, Pastor Wright has left a trail of evidence that paint a picture of a radical activist, a man practicing a version of liberation theology, in which Jesus is not seen simply as a redeemer, but as a liberator of the oppressed. The portrait painted in Wright's own words by John Perazzo at Front Page Magazine depicts a deeply radical man, convinced that racism is endemic in America,

His views on capitalism are, if anything, even less benign:
"Capitalism as made manifest in the 'New World,'" says Wright, "depended upon slave labor (by African slaves), and it is only maintained by keeping the 'Two-Thirds World' under oppression."
Wright's associations with Rev. Louis Farrakhan add to the picture of a radical far out of the mainstream. 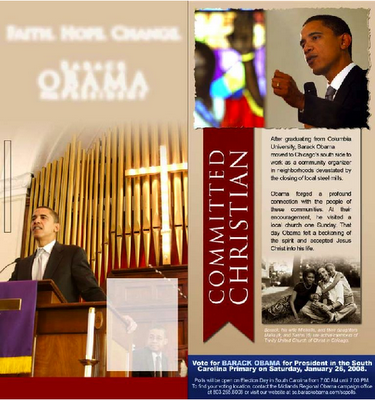 Now consider Barack Obama's own words about how he became to be a Christian, and in what context:
It's around that time that some pastors I was working with came around and asked if I was a member of a church. "If you're organizing churches," they said, "it might be helpful if you went to a church once in a awhile. And I thought, "I guess that makes sense."
"That time" refers to his work as a "community organizer" for the Developing Communities Project (DCP) of the Calumet Community Religious Conference (CCRC) in Chicago. As Kyle-Anne Shiver wrote on AT:

Both the CCRC and the DCP were built on the Alinsky model of community agitation, wherein paid organizers learned how to "rub raw the sores of discontent," in Alinsky's words.

Alinsky instructed his followers in the art of using churches as bases for social activism.
So one Sunday, I put on one of the few clean jackets I had, and went over to Trinity United Church of Christ on 95th Street on the South Side of Chicago. And I heard 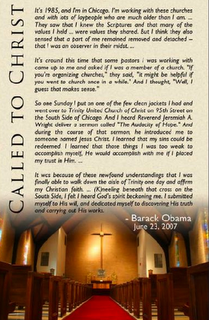 Reverend Jeremiah A. Wright deliver a sermon called "The Audacity of Hope." And during the course of that sermon, he introduced me to someone named Jesus Christ. I learned that my sins could be redeemed. I learned that those things I was too weak to accomplish myself, He would accomplish with me if I placed my trust in Him. And in time, I came to see faith as more than just a comfort to the weary or a hedge against death, but rather as an active, palpable agent in the world and in my own life.

It was because of these newfound understandings that I was finally able to walk down the aisle of Trinity one day and affirm my Christian faith. It came about as a choice, and not an epiphany. I didn't fall out in church, as folks sometimes do. The questions I had didn't magically disappear. The skeptical bent of my mind didn't suddenly vanish. But kneeling beneath that cross on the South Side, I felt I heard God's spirit beckoning me. I submitted myself to His will, and dedicated myself to discovering His truth and carrying out His works.
The words "newfound understandings" leap out at me. The level of generality at which Obama speaks here permits a wide variety of interpretations. But these words are not inconsistent with coming to understand Jesus as an agent of peaceful revolutionary change, and seeing His truth in the sort of light cast by liberation theology.

Now that candidate Obama is openly running on the basis of his newfound understandings, I believe that he should answer questions about what they are, precisely. These new understandings  appear to have played a central role in his choice to seek power, which makes them a topic of legitimate interest by the electorate. And his long and deep association with Pastor Wright, which he has touted as part of his campiagn, raises serious questions about Barack Obama's true views.
Thomas Lifson is editor and publisher of American Thinker.
|