Warning: mysqli_free_result() expects parameter 1 to be mysqli_result, bool given in /var/www/html/americanthinker/admin/common/functions/func.general.php on line 126
 John Bolton and his Upper West Side 'press conference' - American Thinker
|

John Bolton and his Upper West Side 'press conference'

Last Thursday night, former UN Ambassador John Bolton went to the Barnes & Noble store at Lincoln Center, on Manhattan's Upper West Side, ostensibly to promote his new book about his experiences at the UN, Surrender is not an Option.  When he reached the podium, he made some brief remarks about the book's objective of explaining how diplomatic decisions are made and, if understood by Americans, have us "going after them (the UN) with pitchforks."

He then stated he would not speak directly about the content of his book, but preferred that those in attendance buy it. Mr. Bolton then threw the forum open for over an hour of questions, an impromptu true press conference for the public. A cameraman from France also filmed the event for a documentary. 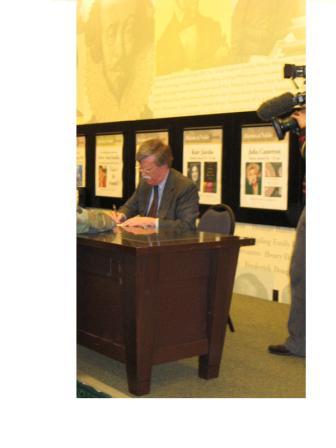 What was next discussed was a good deal more substantive than most of the presidential debates this season. The largely -- though not exclusively -- conservative questioners put CNN/YouTube to shame. Mr. Bolton replied to all questions offered.

Not surprisingly, one of the early questions was whether the US should form a League of Democratic Nations to replace the UN. After Mr. Bolton commented that "Walking across First Avenue (to the UN), you enter the Twilight Zone," he cited Former President Aznar of Spain's idea of making NATO into a global organization, admitting Israel and other democratic countries. This was followed by a question about the Annapolis Conference, recently completed. Former Ambassador Bolton called the conference "bad timing" because both the current Israeli and Palestinian Authority governments are both weak. Vigorous diplomacy can't overcome an unfavorable general geopolitical situation, he added.

Someone asked Mr. Bolton whom he preferred in the 2008 elections. He refused to get involved, other than to quip "the Republican."

Then came a classic liberal questioner who criticized the Bush Administration's policy in Iraq for not making the US any friends in the Middle East and around the world. The questioner even added a comment about President Bush's "swagger," for good measure.

He calmly replied to this critic that the attacks on 9/11 were planned years before the first day President Bush took office, while he was "just swaggering around Texas." Former Ambassador Bolton then criticized another Utopian myth: that if we could just solve the Arab-Israeli problem, the world would be a lot calmer. Mr. Bolton then said that even if Israel were to (my comment: God Forbid) disappear, the various Sunni and Shiite groups would be attacking one another.

At this point, Mr. Bolton did respond to the crowd with a bit of a lecture/mini-policy statement. He stated that the main issue for US foreign policy is how to protect ourselves and our allies -- and that we haven't pursued a sufficiently strong response.  He also said that Iran should be "down on their knees thanking us" for removing the dual threats to their country of the Taliban and Saddam Hussein, but have persisted in opposing the US.

Someone else asked Mr. Bolton a question about the US's approval in the world under President Bush's policies. He shot back with a history lesson. Mr. Bolton informed the questioner that after World War II, polls in Gaullist France showed a majority of the French with very anti-American feelings -- and this shortly after the US liberated their country and during the years of the Marshal Plan. Jumping ahead to a remark made by an audience member at the very end of the presentation, a Holocaust survivor, he warned those in the audience about being overly concerned about what others think of you and how that attitude blinds you from understanding those who would do you harm.

Not surprisingly, an audience member asked what Ambassador Bolton thought of the NIE report on Iran's nuclear capabilities and intentions. Mr. Bolton first replied that the questioner should read Henry Kissinger's op-ed in the Washington Post, which he considered even better than his own previous op-ed in the same paper.

Besides his general objections, Mr. Bolton stated specifically that Iran has 3000 centrifuges and wants to acquire 50,000 centrifuges. He also stated that the next US President should not release such internal government papers, that the intelligence community was engaging directly in political policy advocacy, if not policy-making.

An audience member asked what should be the proper size and composition of the UN Security Council. Ambassador Bolton started with another history lesson, stating that the world is very different from what it was in 1945, that, even then, Franklin Roosevelt didn't think France should have been among the original permanent members, but Britain and the Soviet Union insisted on it. Mr. Bolton mentioned that Brazil should be on the Security Council, but the Spanish-speaking countries of South America would and can block such a move. Mr. Bolton also said that Japan should be on the Security Council, but China would veto such a move.

He stated that the reason that many of the European nations supported the measures proposed in Bali was that they could meet the carbon limits because of their widespread use of nuclear reactors, that the protocol carbon limits would not hurt their growth as they would the United States.

The next topic brought up by an audience member was negotiating with North Korea. Mr. Bolton made the analogy that our dealings with North Korea have been like the naive Charlie Brown dealing with Lucy and the football, where she promises not to move it away before he goes to kick it, yet she breaks her promise every time. Mr. Bolton further stated that the US has insulted Japan by not considering the kidnapping of some of their citizens by North Korea to be a significant human rights violation worthy of a US official protest.

The subject of Darfur was then brought up by a questioner. Mr. Bolton replied that Darfur is a demonstration of the UN's ineffectiveness, as was the "Teddy Bear" Incident. He also stated that the Sudan's ability to successfully "stand down" the UN, to frustrate any attempt at changing what goes on there, is further testimony to the ineffectiveness of the UN. In fact, Mr. Bolton told about New York Mayor Mike Bloomberg's attempt to get a copy of the UN's floor plans to aid the fire department, as every other office building has handed over such plans. It took months of diplomacy to get them. Ambassador Bolton had to raise the issue in a Security Council meeting.
When the other parties learned this, they understood they also would be burned if a fire were allowed to spread for lack of information for New York's firefighters. That brought pressure to finally release the floor plans. As is, the roadway entrance to the UN is not strong enough to accommodate current heavy New York fire trucks. Mr. Bolton then stated that the problem is so bad that Mayor Bloomberg is considering suspending tours for New York school children.
An earlier reference Mr. Bolton made to the "UN as Twilight Zone" is quite fitting.

Mr. Bolton said the 2008 Presidential Election is very important and he doesn't agree with those who would ask the US has to pass John Kerry's "Global Test" for its' policies, especially after what he has seen at the UN - and that the US should have no qualms about being an advocate for its' own policies over any "global consensus."

Jack Kemp is not the politican of the same name.
|