Warning: mysqli_free_result() expects parameter 1 to be mysqli_result, bool given in /var/www/html/americanthinker/admin/common/functions/func.general.php on line 126
 Natural Law and Child Abuse - American Thinker
|

A recent AP news report has concluded, after compiling the results of numerous studies over the years, that there is a strong and disturbing link between severe child abuse and non-traditional family environments. In the article' words:

"[Scholars and caseworkers] note an ever increasing share of America's children grow up in homes without both biological parents, and say the risk of child abuse is markedly higher in the nontraditional family structures."

Examples of "nontraditional family structures" include:
o  Children living in homes with unrelated adults (these children are "50 times more likely to die inflicted injuries as children living with biological parents"); and
o  Single parent homes or children living with stepfamiles (these children "have a higher risk of physical or sexual assault than children living with two biological or adoptive parents").
Lastly, the studies found that "girls whose parents divorce are at a significantly higher risk of sexual assault, whether they live with their mother or their father."
The studies seem to show that even children in adoptive environments seem to be ok with two parents.  The report goes on to tell in painful detail however the brief life stories of little toddlers who were beaten, drowned, thrown across rooms, and buried under cement - all victims of what Plato called "democracy's insatiable desire for what it defines as the good": freedom.  In this case, it is our freedom to choose "alternative" family environments and be "affirmed" every step of the way.
I am not sure what is going over at the progressive AP, but the report's conclusions demonstrate in utterly stark terms a fundamental truth that conservatives have held dear since the time of Aristotle (or, if you are from China, since at least the time of Confucius): Natural Law.  I was told once by a very smart professor that Aristotle was much smarter than I was, and he was right.  He also told me that Aristotle would resurface every now and then, in the form of nature, to remind us in often ugly ways, of our excesses, and of our proper limits.  We know, for example, that study after study demonstrates a link between abortion and depression, and abortion and suicide.  We also know now that there are studies showing strong connections between abortion and breast cancer.  Aristotle's great Christian interpreter, St. Thomas Aquinas, argued that divorce was also unnatural, and that two parent families were natural:

Now it is clear that in the human species the female is far from sufficing alone for the rearing of the children, since the needs of human life require many things that one person alone cannot provide.

Aquinas goes on to argue that among the "many things" human, as opposed to animal, offspring need are "instruction for the soul" and discipline, responsibilities he places mostly on the father.
This "natural law" argument for the sanctity of marriage really hit home for me one day years ago while I was out jogging on a lakeside trail in Lake Tahoe.  At a chin-up bar stationed along the trail I met a homicide detective from Oakland, California, who had been investigating murders there for twenty years.  This quiet, affable, black detective did not waste time however when I asked him to tell me what he thought the reason was for the alarming crime rate: "a lack of fathers."  The simple solution, stronger marriages, never gets any press, he informed me, because it is "politically incorrect" and "no one [politicians and social services] makes any money off of it."
Plato said that what a society defines as its "good" will ultimately destroy it, and that "good", for those of us living in a democracy, is freedom.  Plato had many unkind words to say about democracy, and he argued that the lowest form of government, a tyranny, would evolve out of a democracy.  In his Republic, Plato makes the case that the best regime would be ruled by philosopher kings who would arrange things in such a way that everyone would strive to think of the common good over selfish interests.
To effect this outcome Plato introduced three radical proposals to what he thought was a relatively sleepy and unreflective fifth century B.C. community:

1) feminism: men and women will share all responsibilities, including military training;
2) the sharing of women and children, and the abolition of private property and nuclear families;
3) the rule of philosophers.
The message here is that private attachments divide society and only serve to disrupt fellow feeling.  By not allowing women to raise their own children and by including women in military exercises Plato hopes to root out the primary threat to his Republic: the biological connections that women have to their children and their families, which are the most intensely private attachments in nature.  In fact, after providing arguments to support his three radical proposals,
Plato makes the case that what most of us (at least until the 1960s) understand as "natural law" is in fact, "unnatural."

Then again we're not legislating impossibilities or indulging in wishful thinking, since the law we established is in accord with nature.  It's rather the way things are at present that seems to be against nature.

This early version of "it takes a village to raise a child" caught the attention of Plato's most brilliant student, Aristotle, and set the stage for one of history's most fascinating and, for our purposes here, crucial philosophical disputes: what is the definition of a family?
Liberals have been pounding the pavement, airwaves, classrooms and newspapers for decades demanding the freedom to "redefine" the family, and they will continue to do so, even despite the empirical evidence above.  In Raphael's famous painting The School of Athens, the frail Plato feebly points away from nature to the sky, and Aristotle, young and bold, flares his palm downward, seeking to embrace nature. 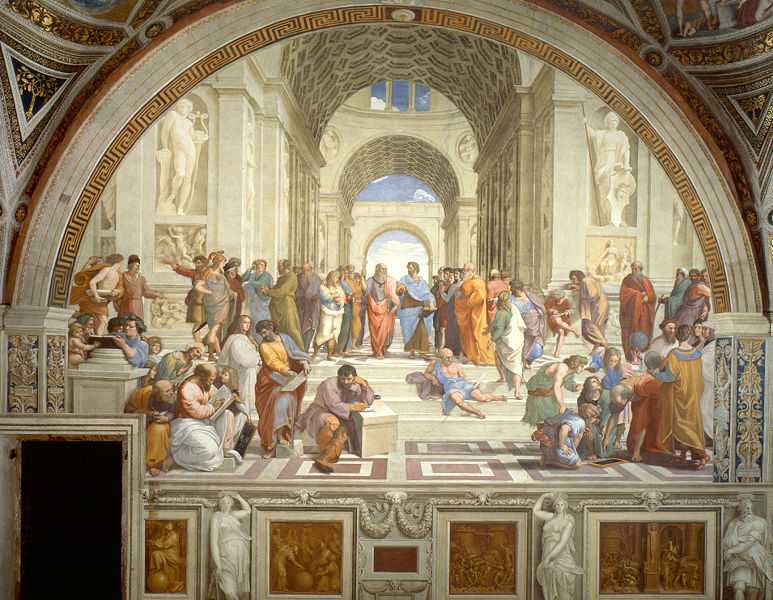 His responses to Plato on the issue of the family may help us to understand what the AP report concludes is the primary cause of this recent spate of child abuse: an increasing number of families with adults and children "who have no biological tie to each other."
Quite alarmed at Plato's proposals, Aristotle set out to refute each of his arguments in his Politics.  His chief dispute with Plato concerned Plato's conception of "unity" or the "common good."  An early interpreter of the "public goods" problem in economics and "tragedy of the commons," Aristotle observed the following:

"that which is common to the greatest number has the least care bestowed upon it.  Everyone thinks of his own, hardly at all of the common interest; and only when he is himself concerned as an individual."

Relating this to the family, Aristotle continues:

Each citizen [in Plato's Republic] will have a thousand sons who will not be his sons individually, but anybody will be equally the son of anybody, and will therefore be neglected by all alike.

Aristotle is attempting to build a very simple but powerful case against Plato: a lack of biological family ties renders individuals less likely to exchange friendship and love.  "Other evils," continues Aristotle, such as homicides and assaults "are much more likely to occur if the relationship is unknown."  But perhaps his most poignant and ultimately powerful address to Plato is the following:

In a state having women and children common, love will be watery; and the father will certainly not say ‘my son' or the son ‘my father.'  As a little sweet wine mingled with a great deal of water is imperceptible in the mixture, so, in this sort of community, the idea of relatiionship which is based on these names will be lost; there is no reason why the so-called father should care about the so-called son, or the son about the father, or brothers about one another.  Of the two qualities which chiefly inspire regard and affection - that a thing is your own and that you love it - neither can exist in a state such as this.

On this point Aristotle concludes:

"how immeasurably greater is the pleasure, when a man feels a thing to be his own; for the love of self is a feeling implanted by nature and not given in vain, although selfishness is rightly censured; this, however, is not the mere love of self, but the love of self in excess...."

Similarly, women learn compassion by caring for their own children.
Aristotle is making a case for the same kind of "graded love" position that became the point of contention between the natural law philosophers in China, the Confucians, and those preaching the abolition of private property and families, led by Mo Tzu.  For Aristotle and Confucius, the "graded love" argument runs as follows: compassion and love are strongest (as opposed to "watery") when there is something of your own to care for.  This can only happen at the core of our "graded" concentric circles: a nuclear family.  In the course of time the children who grow up in the core of the circle receive the compassion and other virtues like filial piety, respect, loyalty, and sincerity natural to things that are biologically connected. When these children go out into their villages, communities, and finally, into society at large (the remaining concentric circles) they are the kind of people who will be able to express these virtues as good citizens.  The catch, however, is that the sanctity and privacy of the nuclear family cannot be disturbed.  All morality then depends on the natural ties that bind families together.
For Plato and Mo Tzu, and their historical, communitarian legacy (Marx, Rousseau, Mao), the problem is precisely the core of the circle.  By "abolishing the family" as Marx says in the Communist Manifesto, as well as "countries and national spirit" one might finally rid humanity of the kind of selfishness that prevents morality, justice, and true "fellow feeling" (the "bourgeois" family, according to Marx, relates only through the "cash nexus").  The advantage then, to the "village" raising the child is that the child will grow up without a sense of "mine."  For Aristotle and Confucius, morality itself is impossible without the sense of "mine."
Who is winning the debate over what a "natural" family is?  According to the AP story,

"family patterns have changed dramatically in recent decades as cohabitation and single-parenthood become common.  Thirty years ago, nearly 80 percent of America's children lived with both parents.  Now, only two-thirds of them do.  Of all families with children, nearly 29 percent are now one-parent families, up from 17 percent in 1977.  The net result is a sharp increase in households with a potential for instability, and the likelihood that adults and children will reside in them who have no biological tie to each other."

Is nature itself on the road to the "dustbin of history?"
|