Warning: mysqli_free_result() expects parameter 1 to be mysqli_result, bool given in /var/www/html/americanthinker/admin/common/functions/func.general.php on line 126
 Monuments to Wimpdom - American Thinker
|

By Duncan Maxwell Anderson
What do these modern memorials to heroism and sacrifice have in common?

* The Vietnam Veterans' Memorial. Designed by college student Maya Lin, it was unveiled in Washington, D.C. on Veterans' Day 25 years ago. It's a black granite thingy-a long, plain wall that lines a big hole dug 10 feet into the ground. It lists the names of the war's 58,000 fallen Americans and . . . nothing else.

In her first proposal to build the memorial, Miss Lin explained its purpose: "We, the living, are brought to a concrete realization of these deaths." That's it. Not to honor what they did. Just a reminder that they're dead. Thanks.

* The Flight 93 National Memorial. The National Park Service has decided to erect the "Bowl of Embrace," in Somerset County, Pennsylvania, where United Flight 93 crashed to earth on September 11, 2001. Here's the plan: For their heroism in overpowering four Islamic hijackers and foiling their attempt to destroy the White House or the Capitol, the passengers are to be honored with . . . an empty field. It's little comfort that the field is surrounded by a stand of red maple trees planted in an arc that eerily resembles the crescent of Islam. The design's original name: "The Crescent of Embrace."

Like the Vietnam memorial, the monument itself has no inscription honoring anyone's actions-just 1970s-style wind chimes and the names of dead people inscribed on glass cubes.

* The National September 11 Memorial. On the spot where New York's mighty World Trade Center stood, the Lower Manhattan Development Corp.'s anointed designer, Michael Arad, decrees that there be . . . an American eagle? How about a statue of the three firemen raising the American flag over the rubble? Heck no. Just two huge, square, "reflecting" pools. Maybe you can gaze at your navel through them. In a complex slated to cost $1 billion, this urban swamp is called "Reflecting Absence."

Absence, indeed. What these modern war memorials have in common with each other is nothing. They portray nothingness. They have no people in them, never mind men carrying guns or swords, statues of Winged Victory, or even doves of peace. Just death and names -- grief without glory.

Oddly enough, for structures that are purposely barren, the promotional literature about all of them says their purpose involves "healing." By "healing," I infer they must mean "sitting in the corner, licking your wounds and whining pitifully." It may not be surprising that both 9-11 memorials have failed to attract more than a fraction of the private contributions they need in order to be built.

Where did such parking-lot-style art come from? On one level, you might say it results from a misunderstanding between the memorial-creating classes and the war-fighting classes.

In the early 1980s, when veterans proposed adding an American flag to Maya Lin's memorial design -- a design that did not originally contain the word "Vietnam" -- the artist complained that installing a flagpole would be "like putting a mustache on the Mona Lisa." I don't think she meant to compare herself to Leonardo. I assume she meant that a flag would get in the way of her Nothing.

That was more than a quarter-century ago, but the vocabulary of barrenness among the memorial artistes and their fans today sounds no different.

In a gushing update on the National September 11 Memorial in New York Magazine, Joseph Giovannini described the design as "an environment that scopes down in ever sharper focus on the inescapable fact of absence, monumentalized by the square, gigantically empty crater."

Much as the academics love this kind of talk and this kind of architecture, something in the public spirit reviles before it. We all die, so to offer voids to the memory of our heroes, and to list deaths without comment about what they did in life is an assertion of meaninglessness, of pointlessness. It is to say, "You sacrificed for others -- but that's not worthy of mention, because now you're just as dead as anyone else."

Or if you prefer, it echoes the jeers addressed to Christ on the Cross: "He saved others. But himself he cannot save." The essence of a hero is that, like Christ, he could save himself, but for the sake of others, he does not.

I don't wish to put excessive blame on the monument-creators. The generation that is producing these minimalist slabs was taught ideology and grant-writing in school, rather than how to draw or sculpt the human form. Their "manual illiteracy" is not unique to the monument game. The fashion industry is famous for turning out designers who can't sew. If you aren't taught to make things with your hands, you don't learn the feel of them and how they work with the human body. The result is clothes that make even 15-year-old models seem un-beautiful, and buildings that look like tombs.

The late Frederick Hart was a modern sculptor who could portray the human body with power. He created the figures of the three soldiers who now face Maya Lin's wall at the Vietnam Memorial. But even they look tentative, rather than determined. We owe better to the men who kicked the Communists' butts with one hand tied behind their backs, only to have their victory given away by anti-military Senators like John Kerry and Frank Church a couple of years later. 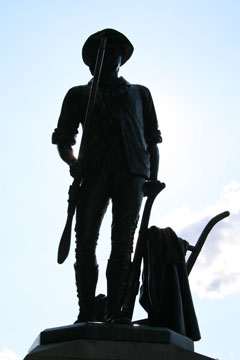 The contrast of our modern fare with Daniel Chester French's "The Minuteman," in Concord, Mass., erected in 1875 for the centennial of the battles of Lexington and Concord, could not be more devastating. "The Minuteman" is best seen in person. He is slightly larger than life-size, and set on a pedestal about 6 feet above the landscape. He's holding a gun, and he is obviously prepared to use it. Not only that, he still has his other hand on the plow. It means he's an ordinary man who must make a living, not a professional soldier or a robot. He steps up when it's time to risk his life violently for his country. He's determined. He seems to be in motion. He's dangerous. My wife describes the statue as having "sex appeal."

It is a crisis if our educated classes are at war with war. Nietzsche said:  "I praise, I do not reproach, [nihilism's] arrival. I believe it is one of the greatest crises, a moment of the deepest self-reflection of humanity. Whether man recovers from it, whether he becomes master of this crisis, is a question of his strength!"

It is indeed a question of our strength. The current scandal is that this generation, which has produced some of the best soldiers and can-do-patriots in our history, has been stuck with the peace-love-and-drugs generation's leaders, and also their monuments.

I say to the Millennial Generation: How about it, dudes? Some blow-torches and backhoes could clear the decks nicely. Then let's put some real sculptors to work.