Warning: mysqli_free_result() expects parameter 1 to be mysqli_result, bool given in /var/www/html/americanthinker/admin/common/functions/func.general.php on line 126
 The 'Bin Trotsky' Video and the Jihadi Failure in Iraq - American Thinker
|

The 'Bin Trotsky' Video and the Jihadi Failure in Iraq

Has Osama bin Laden turned into Osama bin Trotsky? As I was watching bin Laden reading carefully from his prepared speech, I couldn't help but notice the dramatic drifting in the rhetoric from Salafi Jihadism to a new brand of neo-Wahabism, which I'd baptize "Jihadi Trotskyism" just for the sake of analytical linguistics. 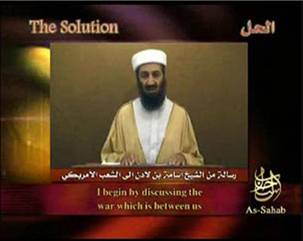 talking at a Caliphate level, to be sure, but stunningly, he was also reciting recycled neo-Marxism of the kind usually generated at Berkeley, Columbia or the web sites of the anarchic and post-Soviet internationalists. This mutation, above all other matters related to hair color, skin health or "where-is-Osama," is the essence of the tape, at least for those who read it from a strategic angle.
In short, the man has turned to a fantasy bi-doctrinal ideology, continuing a trend he has shown interest in years ago. I wasn't the only reader of his speech who noticed the mutation, including even the senior analyst of al Jazeera International commenting on the substance. He said, "Are we seeing a Marxist Bin Laden now?"
Obviously, the question was a sort of a teaser, for the Islamist movement knows all too well that the chief of al Qaeda is an ultra-Jihadist and is not really converting to Karl's, Vladimir's, Leon's ideas. As the connoisseurs of bin Laden thinking on multiple Western and Arabic channels agreed, he is "using the weapon" of extreme left wing discourse to generate further chaos inside the enemy camp. So, what was the real and profound goal of this tape? Let's follow the stages of Jihadi logic:

Perhaps the most important ground upon which the entourage of Osama decided to produce the tape (regardless of the psychological abilities and health of the boss), was the state of affairs of al Qaeda worldwide: not so brilliant by the movement's standards.

Since 2001, the Taliban regime was lost and Afghanistan was never recovered from the infidels. The remnants of al Qaeda and their allies re-gathered in Waziristan, threatened the Pakistani Government and launched cross-border attacks. Although the game is not over yet, Musharref's forces are now engaging them. In Somalia, the Islamic courts were driven out of the capital, at least for now. Even in tiny Lebanon, the local bin Ladenists were hit by the Lebanese Army.

And of course in the main battlefield, the Sunni Triangle of Iraq, al Qaeda commanders were killed and local Sunni tribes are fighting the foreign Jihadists,  a matter to be raised today in Washington by General Petraeus. While the news isn't good strategically, the Jihadists care less about losses than they do about the continuous process of "Jihad 'til Allah decides the outcome."

So the first reason behind the tape was a pressing need to show The Commander in command, to underline that the struggle continues.

And instead of discussing al Qaeda's failures -- particularly in Iraq -- Osama needs to redirect or bypass this debate on his movement's failures. So to dodge the obvious problems, the "speech writers" of the organization mount an ideological assault on what they see as the United States' own systemic issues, a matter bin Laden found pleasure in addressing. He wants to impress his own cohorts with his overwhelming knowledge of the inner complexities of American politics.

In a sense, he is fleeing answers about the "dar al Islam" (the Islamic zone according to the Jihadists) to focus his followers' questions on the "dar al harb" (the infidels' zone). And to demoralize his enemies and reassure his crowd that he is on top of issues deep behind enemy lines, he obviously sought the expertise of his own Americans. 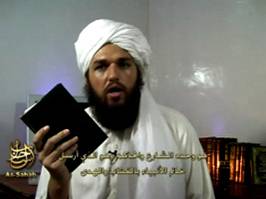 From public records, we know that Adam Gadahn, aka, Azzam al Amriki, is the American spokesperson for al Qaeda. Gadahn himself has obvious ties to the Jihadi underground in the US. And that underworld absorbs the anti American anarcho-Trotskyite literature available online, on campuses and in some segments of the media.
This Anarcho-American Jihadist faction has a direct channel to Bin Laden, not always to the satisfaction of the pure Salafists of al Qaeda. But the master likes the intellectual toys offered to him by his advisors. He feels he can relate to the American public, or so he is thinking.
As I argued in my book Future Jihad, Bin Laden committed his first big mistake by launching the 9/11 attacks too early. He may be committing a second mistake by presuming that Azzam and the scholars of anarcho-Trotskyism are representative samples of the American society. Indeed, by attacking the Democratic Party for "not doing enough" the tape revealed the influence the far left has had on al Qaeda's bet to punish the Party for not ending the War on Terror fast enough.
The tape left some unease among wider circles of the usually sympathetic commentators on al Jazeera. Yassir al Zaatar from Amman argued that the speech was fantastic: "It will strengthen the Democrats, at the eve of the Iraq debate."  Abdel Bari Atwan, editor of al Quds al Arabi said Bin laden is appearing under the mantra of a world Islamic authority, almost a Caliph.
But online bulletin boards witnessed a chaos unseen before. A few samples of thousands of such posting postings:

From Sudan: Usama: Allahu Akbar against the Americans, the Jews and the agents. We will behead them and throw their heads to the dogs
From "Muslim": The tape is fabricated, this is not Bin laden, this is the CIA..
From "Iraqi": Who see serenity in killing the children of Iraq like the criminal Bin laden

Jehina: Bin Laden has brought a new problem. He is a toy in America's hands..

The lion of al Qaeda: to all Christians and Crusaders, we are coming

Sanaa': we miss you o sheikh of the Umma.. Allah renders victorious the hero of the Mujahidin....

The Trotskyite "experiment" of Bin Laden and of his "anarcho-Jihadist" advisors may not have been the greatest idea. As one can see from the reactions, many of the purest Jihadists can't absorb the Marxian theories of global corporations. They only seek the good old Jihad against the Kuffar. They have gotten too much Wahabism in their madrassa schooling. Their doctrines come from Hassan Banna and Sayid Qotb, not Noam Chomsky or the Ivy League elite.
In the end, the speech shows that the War of Ideas is the ultimate battlefield in the War on Terror. This is why, US leaders in both parties and all branches of power should not ignore or dismiss bin Laden's tape. To the contrary, I strongly suggest they respond to it, point by point.  All those named in the speech must answer al Qaeda directly, instead of fleeing into domestic politics.

Dr Walid Phares is the director of the Future Terrorism Project at the Foundation for the Defense of Democracies and the author of The War of Ideas: Jihadism against Democracies.
|