Warning: mysqli_free_result() expects parameter 1 to be mysqli_result, bool given in /var/www/html/americanthinker/admin/common/functions/func.general.php on line 126
 Tom Snyder (1936-2007): A Personal Recollection - American Thinker
|

For people of a certain age, Tom Snyder, who died on July 29 at age 71, was a major figure - a pioneer - in television news and talk programming. He burst on the national scene in 1973 as the unconventional host of the Tomorrow Show which ran for eight years each weekday night on the NBC TV network following another institution, The Tonight Show With Johnny Carson.

After the societal upheavals of the 1960s in which the media and on air reporters played a pivotal role, Snyder was a different kind of figure who became influential in his own right. He heralded a new era, bridging the old black-and-white, teletype clattering in the background, Cronkite/Huntley/Brinkley style of TV presentation and the new, full color, hyper-confessional Oprah-esque world that would come to dominate the scene starting in the 1980s.
Throughout his career - on Tomorrow, anchoring local TV newscasts, hosting call-in radio talk shows, and returning to cable and then broadcast television for a last round in the 1990s - Snyder's persona was consistent: spontaneous, informal, conversational, and frequently funny. It made him a star and I learned for myself that it was not an act.
In June 1987, I was booked to appear as a guest on the Michael Jackson Show, a national ABC network talk radio program broadcast from KABC in Los Angeles. Substituting for Jackson that day was Tom Snyder, who would soon launch his own radio show on the same network.
By that time, I was usually not awed by media personalities. Still, it was a bit of a thrill to anticipate being interviewed by the man who had talked with so many memorable individuals and icons, including John Lennon and Henry Miller.
Ushered into the on air studio after waiting in the green room, I was immediately struck by Snyder's warm and friendly welcome. Unlike Michael Jackson, the very proper and formal host of the show, with whom I had worked on several other occasions (not to be confused with the entertainer Michael Jackson of Thriller fame), Snyder was dressed very casually and had the unassuming manner of entertaining a guest in his living room. I half expected him to offer me a drink. At the time he was 51, although he already had gray hair and he seemed like he'd been through several careers - Tomorrow, TV news anchoring, and now radio.
The subject of the interview involved my reporting on the politics of cancer research and innovative treatments - a controversial area then and now. While obviously not an expert on the topic, Snyder had a pro's skill at interviewing, and he also approached the topic, and me, with openness and a sense of curiosity, and not a rush to judgment. The dominant memory of the program that morning two decades ago is "relaxed." Over the years I've appeared on hundreds of radio and TV interview and talk programs and I always recall the show with Tom Snyder as one of my all time favorites.
Snyder even consented to my videotaping some of the interview with a first generation hand held Sony 8 mm camcorder (which, as a technology buff, he was very interested in), and he graciously posed with me for still pictures during a network news break. 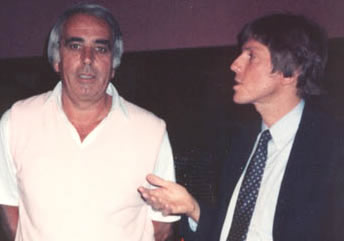 The memories of that encounter, and the decades of watching and listening to Snyder (his own radio talk show in the late '80s and early '90s was very good), immediately draw for me a contrast with most media personalities today. Coincidentally, I've been thinking about that subject lately, as I've been writing about the CNN/YouTube Debates and doing follow up research.
Snyder was a genuine original personality -  so original in fact that the dead on parody of him by Dan Aykroyd on Saturday Night Live starting in 1976 would, for many viewers, eventually overtake the original, especially during the Eighties when Snyder was mostly off TV.
Snyder didn't need a legion of producers and writers to get him on the air. I doubt that he was dependent, as are today's anchors and hosts, on the TelePrompTer. His career is also a reminder that at one time people on TV were not chosen almost solely for their youthful images and stunning good looks.
My encounter with Snyder also reminds me of how he best exemplified an earlier generation of TV news and talk show heavyweights. He didn't wear his politics or his ideology on his sleeve. (To this day, I don't even know for sure what his political leanings were.) He was a gracious host, including to people of varying political persuasions (although he didn't suffer fools, either). I was thinking that - if he was more liberal than not (and I'm not even sure of that) - he was like the Joe Lieberman of network TV, which is meant as a compliment.
After leaving his last program, The Late Late Show on CBS TV in 1999, Snyder basically retired and spent time at his homes in Los Angeles and in the San Francisco Bay area. In 2000, he started a Web site, colortini.com, where he communicated in his usual open and accessible style with visitors and fans in the new interactive Internet medium. In April 2005, he announced at the site that he had been diagnosed with cancer, chronic lymphocytic leukemia. For awhile, he wrote in diary style about his day to day life including the treatments he was undergoing. He projected optimism and reported that his doctors assured him that his condition was "treatable." But before the end of 2005, there was an abrupt announcement that he was closing the site.
The next news about Tom Snyder, on Monday morning July 30, 2007, was that he had passed away the day before in San Francisco, of complications of leukemia. It may be a cliché, but it feels like the end of an era, in this case a door closing with finality on some major aspects of the last third of the 20th Century.
And there's this interesting footnote to the news today (source: Wikipedia): In 1985, Snyder returned to the television talk show format with a live, hour long afternoon program on KABC-TV in Los Angeles. He intended to take it into national syndication the following year but that plan was canceled after Oprah Winfrey struck a deal for her own Chicago-based show to go national first, in September 1986, taking over Snyder's time slot on his flagship station KABC. If Tom Snyder had been the first one to go national in that influential time slot, things might have turned out differently.